Fuels and Energy Carriers for Transport

The objective is to compare current (2016) and future electric and plug-in hybrid vehicles with vehicles running on the conventional motor fuels gasoline and diesel. The model covers the full life cycle of the vehicles, consisting of the phases production, use and decommissioning (including recycling). The production chain of the fuel or electricity is included as well. The model uses independent, state-of-the-art environmental evaluations (LCA) of vehicles and their use. In the full report, the approach followed is described in detail.

The multitude of model settings enables scenario analysis on a vehicle level and can show the consequences of e.g., a changing electricity mix, or of an increasing average battery size and range of electric vehicles. In the full report, the model is described in detail. The model is prepared for extension into future years, which would enable an investigation of the effect of future developments in manufacturing, use and recycling. Thus far, this has been implemented only for electricity mix compositions.

The present work provides answers to questions such as:

An important aspect in changing to electric mobility (electric drive) is the trade-off in emissions between the use of the vehicle, the production of the energy carrier and the production and recycling of the vehicle. To evaluate the potential contribution to climate change and air pollution, each of these three parts is included in the analysis, see Figure 1. 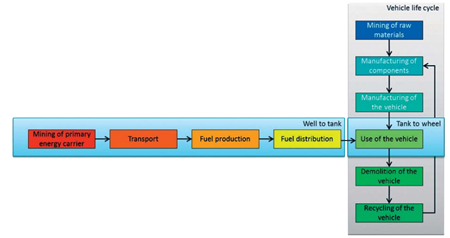 The impacts considered are the contribution to climate change, because of the emission of greenhouse gases including CO2, methane and N2O, expressed as CO2-equivalents using GWP-factors.

The model allows the user to define the vehicle configuration to be analysed by setting parameter values in the control panel. The model then calculates for that given configuration the life cycle CO2 impacts. 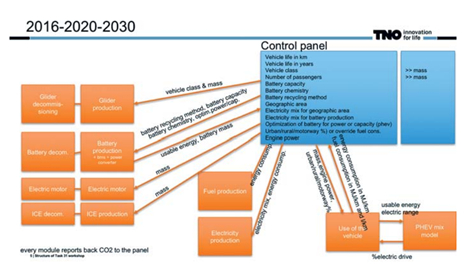 The collected literature data (see final report for more information) is used as input for the LCA (GHG) model which has been developed to determine the GHG emissions for the vehicle life cycle GHG emissions.

Each study has its own scope and depth. Even LCA studies reported in accordance with the ISO 14040/14044 standards and other guidelines such as the ILCD Handbook can differ significantly amongst each other. Moreover, vehicles discussed in one source may not have the same specified functionality, such as load capacity for trucks, as vehicles in another source.

The aims of the consolidation are:

The consolidation has been done by matching literature data. The rules to scale or otherwise interpret the data to perform the matching, are derived from the variety of literature. A model will be built that contains the derived rules, for example the relation between environmental impact and the weight of a vehicle (excluding battery), or the relation between a fuel’s direct emissions and the impact of its production. The relation between vehicle use and fuel consumption will be included as well, based on TNO experience with measurements in this field.

Next, vehicle cases were constructed for both passenger cars that fulfil matching minimum requirements in terms of power to weight ratio and minimum range, as described above.

The objective of Task 31 is to provide stakeholders with credible LCA based information for cars. This information enables users to determine the impacts on greenhouse gas emissions of different vehicle configurations and use profiles and fuels. The objective of the model developed is to investigate the impacts of possible future pathways and thus enable policymakers to make fact-based decisions.

Using an easy-to-use input panel, the user defines the car to be analysed using pre-set choices (for example for the choice of drivetrain or car class) or free value fields (for example for vehicle weight or the battery capacity). The model uses peer reviewed and open LCA data as well as data published in EU Framework publications. In the final report it is explained in detail how the LCA approach has been applied and which sources for the data have been used.

Conclusions from this task include:

The T31 model is to analyse and compare published LCA data in an “apple to apple” comparison. Published data from VW Golf, VW Up!, Nissan LEAF and Nissan Pulsar have been compared with the T31 model analysis. From these comparisons, several observations have been made: