In 2016, EN 50604-1 was published, the first battery safety standard from the European standardisation body CENELEC. This set the lead globally and was followed by ISO 18243, also referencing the interface connector defined by IEC SC23h and the communication protocol defined by IEC TC69-WG10. This means that when EN 50604-1 is harmonised (listed in the Official Journal as meeting the essential safety requirements of the relevant directives) it will not only define the technical state of the art, but it will also be almost essential for manufacturers to comply with it. This will enable easy infrastructure interconnection down the road.

The aim of Task 23 is to represent the interests of local governments in the standardisation of Light Electric Vehicle system architectures, infrastructure, communications and interchangeable batteries. This will be achieved through following the IEC TC69-WG10 61851-3-1/7 series, as well as other related IEC and ISO committees.

The key objective of Task 23 is to ensure that there are no gaps within the technical infrastructure defined by IEC and ISO standards. These standards could then be used as a good starting point for international GTRs (Governmental Technical Regulations) in moving towards one charging and locking system for all pedelecs. 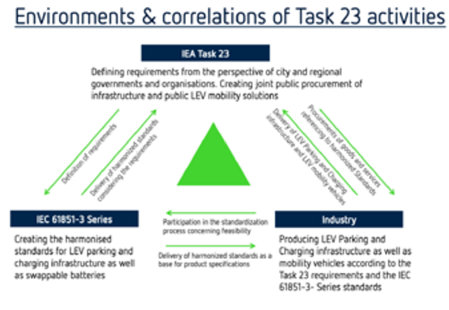 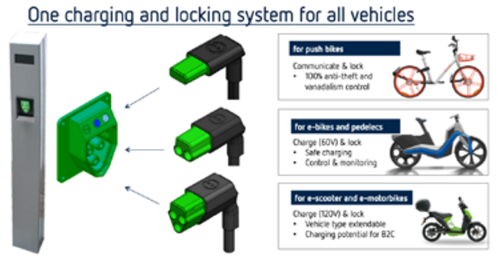 Figure 2 The three versions of the IEC connectors for public charging of LEVs, all fitting into the same sockets to be installed in public and semi-public locations. The three pin connector version is meant for larger motor scooters or LEVs – this connector can handle up to 7.2 kW charge current at voltages up to 120 V DC. The two pin connector will be probably the most popular with power limited to 3.6 kW charge current and a maximum voltage of 60 V DC. The zero pin connector could be used for non electric cycles which also use bicycle parking facilities. Source: Anke Torkuhl

Members of Task 23 can participate in events such as best practice sharing study trips, exhibitions and conferences. They may also host their own local events about Task 23, and invite international experts to share their insights. They can create tenders and joint tenders with other cities or regions for LEV infrastructure. They will share experiences with suppliers and their products, with other local governments and operators interested in acquiring similar components.

Target a bluprint for public tenders for LEV infrastructure

In 2019, IEC TS 61851-3-1/2/4/6/7 received a positive vote and was therefore due to be published as an IEC Technical Specification. However, the IEC changed the result in the aftermath of the vote, which reversed the result on two items so that they were rejected. IEC TS 61851-3-1/2 is due to be voted on again in 2020, a legal investigation is still ongoing.

Nonetheless, the first public tender which makes reference to these standards for the acquisition of public infrastructure, for parking space management of LEVs and sharing bicycles, and of course for charging infrastructure, went live in March 2020 in the County of Thuringia/DE in the context of pedelec usage for tourism.

Future tenders will also include a section on the requirements and specifications of bicycles, pedelecs and electric scooters for public use. The need, especially for the management of non-moving traffic, recently became very obvious in many cities around the world. In 2019, extremely popular sharing bikes and scooters flooded city sidewalks and streets. This caused issues on sidewalks, and spurred local governments to regulate this effectively. For this purpose, the Charge and Lock Cable system is perfectly suited to free dense urban areas from market saturation by stimulating vehicle sharing as well as private vehicle usage. Lock cables without the integration of the charging function are widely popular in Japan proving the approach to be a viable business case.

Experts will be gathered in cities where local governments have established successful LEV infrastructure systems. The study trips will share findings and summarise positive and negative experiences – distilling the findings into easyto-follow recommendations.

Publications with recommendations on LEV infrastructure

Publications will be created summarising key findings and listing recommendations on how to establish the most suitable LEV infrastructure. Numerous lectures have been presented since 2017.

Promoting the needs to potential suppliers

Publications summarising the key findings and listing recommendations on how to establish the most suitable LEV infrastructure will be created. Numerous lectures have been held since 2017 summarising Task 23 activities and findings. A best practice sharing guide which summarises all findings since the beginning of Task 23 will be published in 2020. The 1st tender blueprint is to be included in this document.

In 2019, Task 23 became part of the EU Horizon2020 Project SELECTRIFIC which is scheduled to run with partners from 10 EU countries until the scheduled closing date of Task 23 in 2024.

Task 23 plans to further acquire members, cities and regional governments to create as large a public tender base as possible for the procurement standards, with high level buy-in and negotiating power, of LEV infrastructure and LEV rental fleet solutions. Beside the focus on standardisation, 2020 will be mainly focused on pilot applications in China, India and Europe as well as industrialisation with industrial and governmental partners.

A political activity started in July 2018 in a petition to initiate a change the historic UN vehicle definition which was defined 50 years ago in Vienna. The target aims to redefine the bicycle to include electric assisted bicycles as well as new kinds of micro mobility for safety reasons. The proposed definition is based on the Task 11 results presented in 2012.