As efforts to manufacture and market EVs reformulate, this Task was designed to capture and report important lessons learned in past and new deployments of electric vehicles. The goal was to develop practical advice for utilities, local governments, OEMs, small firms, regulators, and other parties involved in future deployments.

The work of this Task relied upon at least three research components:

DEleven workshops were held between October 2007 and April 2010 in France, Germany, Japan, Sweden, Switzerland, the U.K., and U.S. Box 6.1 presents an overview of the nine workshops that were organised. 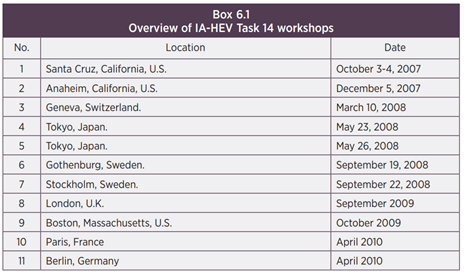 The workshops resulted in the compilation of practical lessons for future deployments in the areas of how regulators can work best with OEMs, how local governments and utilities can best develop infrastructure and incentives for future EV deployments, and how state and OEM marketing can best introduce EVs to the public. In particular, these small workshops have resulted in candid and in-depth discussions.

The study contains many lessons and detailed discussions of past deployment efforts in several countries, which we are synthesizing into a report. We offer here the types of lessons learned in the workshops held during 2010 and before: